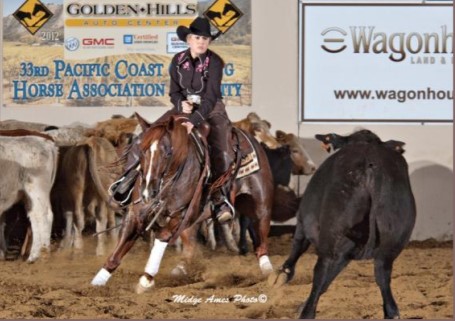 However, Kelsey Weeks sneaked out a 216 on ONE SWEET SIS (One time Pepto X Star of the Flo) in this herd. This gorgeous four year old sorrel mare is one little power-house to watch . She has already won the Amateur Futurity in Ft. Worth as a three year old with Kelsey, who bought her from Denise Seiz last year. Kelsey and One Sweet Sis also won the four year old Amateur at the Cotton Stakes, plus she won the Amateur Stakes at Brazos Bash. Kelsey said she has made the finals everywhere she’s shown over the summer. When asked about her plans for this horse, Kelsey said, “Just keep showing her I guess.”

Sixteen horses later, showing late in the last set, THIS CATS DAZZLIN (WR This Cats Smart X MS BF Quicksilver) dazzled the judges enough to nudge up their scores to a 219 with Melissa Weis in the saddle. You could tell that attractive and petite Melissa was happy with that. This Cats Dazzlin carries the barn name of “Winnie” because she always nickers for food, according to Melissa. This resonates with Melissa, who considers herself a 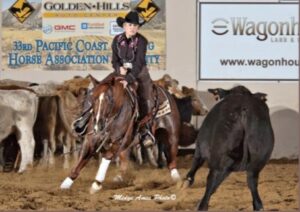 “foodie” too. In fact, Melissa is a restaurant critic and has a widely read blog called “Melissa’s Good Taste.” Since she has traveled to horse shows for so many years and had a chance to taste test at numerous restaurants, she started blogging about it, and her writings caught on. Check it out at www.melissagoodtaste. blog-spot.com.

The Quarter Horse News even picked up the story about her food blog and ran a feature about it because it is so widely read by Quarter Horse and cutting horse show aficionados. It is certainly not uncommon to be sitting in the stands and hear people ask about where is a good place to eat in town. Anyway, back to her fellow “foodie”, Winnie, who was raised by Melissa and husband/trainer Scott. They share Winnie, with Scott showing her in the Open, where he has been successful as well. For example, they took her to the Super Stakes in March, where Melissa finished third in the four year old Non-Pro and Scott was in the same finals in the Open. Melissa has made the finals in the limited four year old division every time they have shown and the pair won this same class at El Rancho just a few weeks ago. Melissa is also in first place in the $100,000 Limited for the First Go Round here.

Emily Jones riding HE’S TOO SMOOTH, advances in first place in the Gelding division with a score of 214. And In the Senior Division, Debbie Hall on GRACIEREY is leading with a 214.