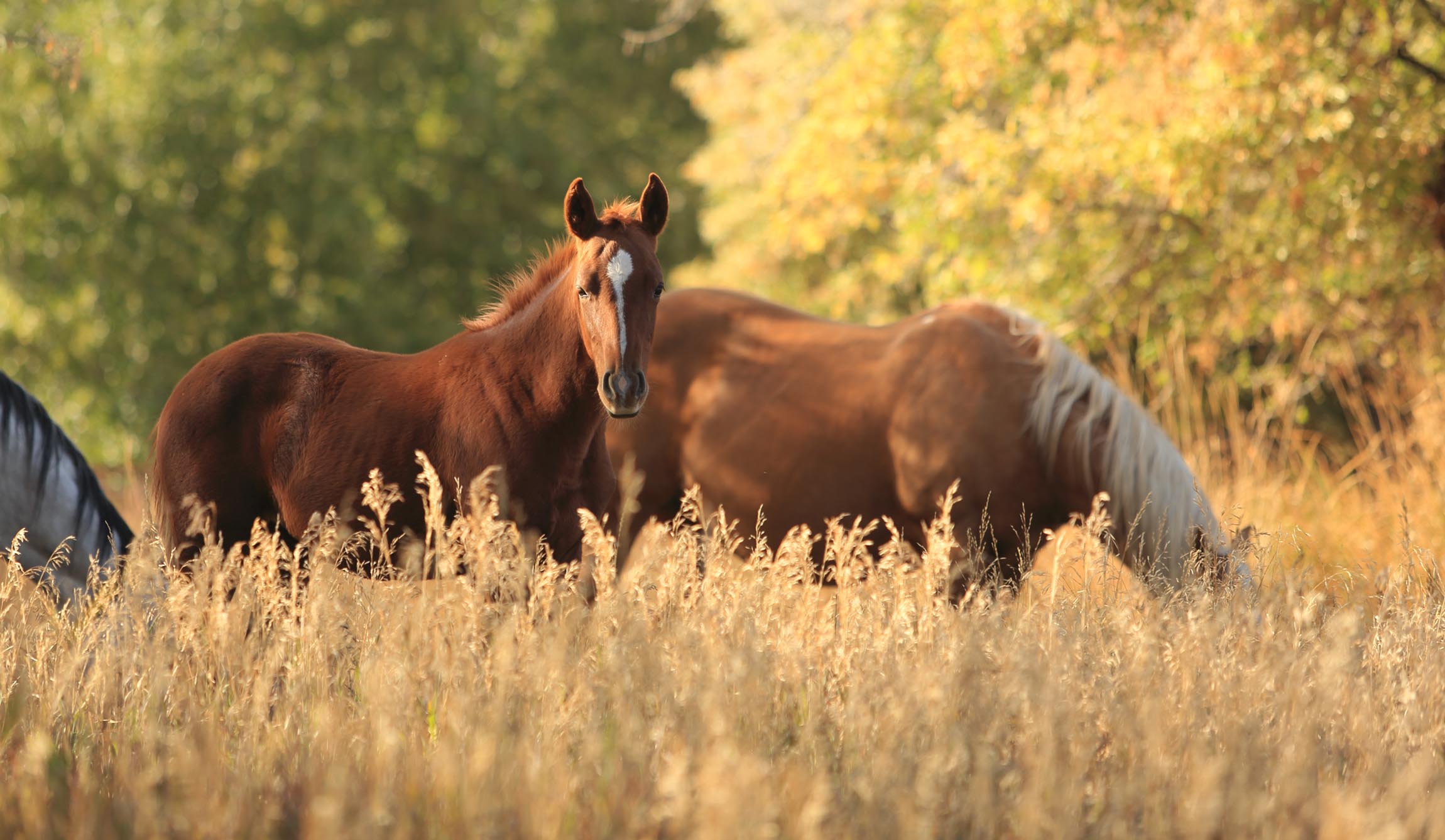 CAN BORING BE A COMPLIMENTARY ADJECTIVE? 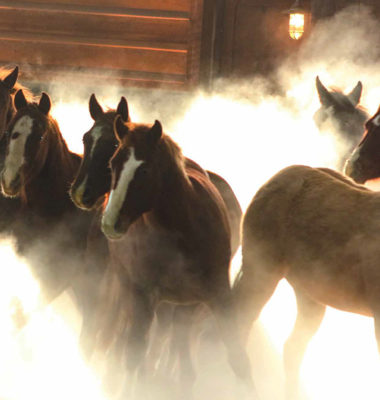 “At the AQHA Gathering of Horsemen, the young horses involved lived outside, as they have their entire lives. When the indoor arena doors opened and they trotted inside, the temperature difference caused a fog that made their appearance a magical moment. We all stood back and admired their grace.”

When a master goes to work, his level of skill is such that a beginner might not even see what he’s doing, and the resulting situation is so harmonious and quiet, it could be considered boring. But if you have knowledge of the craft, you can understand the skill being demonstrated; and that is actually immeasurably fascinating.

So it was at the AQHA Gathering of Horsemen, held at AQHA Ranching Heritage Breeder Wagonhound Land & Livestock in Douglas, Wyoming, and led by AQHA Professional Horseman Chris Cox. Chris has a long resume of accomplishments, including being a four-time winner of the Road to the Horse colt-starting challenge, top placings in National Cutting Horse Association, National Reined Cow Horse Association and team roping competitions, as well a television show on RFD-TV.

The horsemen started a herd of Wagonhound’s high-quality young horses under saddle in a steady and quiet manner, without a bit of drama. They moved so steadily and calmly, recognizing what could become an explosive situation while it was still merely tensed muscles or flicked ears and turning it into a relaxed, positive experience for the horses. 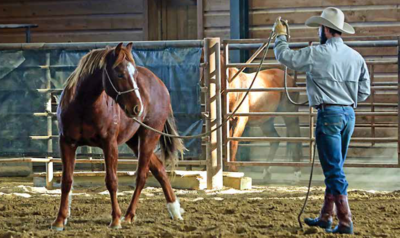 Gage Moorhouse works Metallic Chic in-hand. Note the horse’s soft acceptance, as he flexes his ribcage and moves all four feet in a relaxed manner.

THERE MUST ALWAYS BE A PURPOSE, A VISION, OF WHAT THE horse will be, Chris told the riders.

“I’m a great believer in when you start a horse, you should have a vision of where he is when he’s finished,” Chris says.

“There are a lot of people in this country that are pretty good at starting a colt. But that’s about all they go to. So if you know how to start a colt and know how to finish one, you have a complete package.”

The horses in the group included colts, fillies and one gelding. All were born and raised on the rugged terrain of Wagonhound’s ranch, developing their bodies and minds. All were bred for performance, and carry royal cow horse bloodlines, including such famed stallions as Peptoboonsmal, Smart Chic Olena, Dual Rey, WR This Cats Smart and Playin Stylish. Their dams, too, are impeccably bred. If the mares themselves weren’t major performers, their black-type pedigrees indicated success from either their own foals, or the foals of their siblings.

“In my opinion, the greatest horse in the world is a good ranch horse,” Chris adds. “Later on, they may become a competition horse, but we also need a good using horse. They tell us where they want to go from there.”

Before they began, the horsemen discussed the horses – some were very strong personalities, while others were more quiet and inquisitive or even a little timid. Each horse was paired up with the horseman who best suited it, as every horse would be started as an individual.

Chris outlined his training steps:
• Teach: Communicate with the horse. Gently show the horse what you’d like it to do.
• Ask: Use feel in your body to persuade the colt to follow your ideas. Do not ever jerk on a horse, as it makes him defensive.
• Tell: If a horse isn’t catching on, use a firmer cue to help him understand the boundary.
• Correct: This is a sharp reprimand after the horse fails to respond to multiple requests, such as kicking the horse to cue him forward.
• Discipline: It is extremely rare that training ever gets to this step, which is reserved only for a horse that attacks a handler (such as kicking, biting or pawing) and requires a handler to defend himself. This step never occurred during the Wagonhound colt starting.

It is vital to start at the first step with every single command.

“A lot of people jump up (the list of steps), and that’s why you see horses get so afraid in their mouth,” Chris says. “They jump right to correct instead of asking the horse first and then coming through. There has to be a level of communication with these horses. And every one of these horses is going to be just a little bit different.” 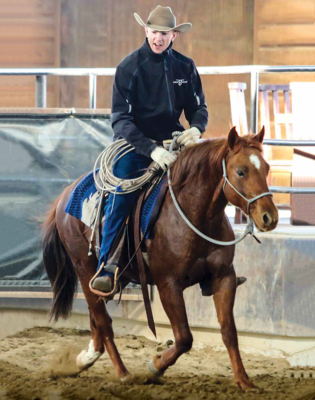 Jed Hirschi works with Catchy Reys, out of the WR This Cats Smart mare Catchy Rhythm.

JED HIRSCHI, THE REPRESENTATIVE FROM THE most recent Zoetis Best Remuda winner, Bartlett Ranch, worked with the colt Catchy Reys, a son of famed cutting sire Dual Rey out of the WR This Cats Smart mare Catchy Rhythm.

Catchy Reys is the mare’s second foal, and while both are too young to have significant records, she herself is a daughter of six-figure-earning mare and producer Ragtime CD.

Catchy Reys was one of the horses with a bold personality, but the expert horsemen were able to channel that into an easy start.

It is important, Chris says, to have a rhythm to the process.

“These colts want you to move forward on them,” Chris says. “Some people say ‘Go slow,’ but one of the worst things you can do is get a colt bored. So you’ve got to do little, short sessions in a learning rhythm. Their mind operates so fast, and you’ve got to keep up with that. If you get too lethargic and slow, their mind gets to looking for sourness.”

Jed caught the sorrel colt using a gentle pressure-and-release method where he walked in, touched him, turned his shoulder and walked away.

Maintaining an almost hypnotic rhythm, he began sacking the colt out with his hands.

It is vital to work in a steady learning rhythm so a young horse doesn’t get bored. Keep sessions short and positive to get a young horse started on the right track.

THE NEXT STEP WAS THE MOST VITAL TO THE PROCESS – GETTING control of the feet.

Flexing the horse’s head around with the young horse just standing can create a dangerous situation. It is vital that all of the feet move, and that the horse doesn’t get stuck. If his feet get stuck, then the rest of his body becomes stiff – his ribcage, his head, his feet, his neck – resulting in a potentially
explosive setup.

“We go to saddle these colts and they look like they’re ready, then all of a sudden they’ll just blow up, go to bucking and get themselves in trouble,” Chris adds. “A lot of times, it’s because their feet are stuck.”

The angle is important. Pushing just the hindquarters causes the horse’s hip to disengage and actually pushes the horse on top of the handler. Chris uses what he calls “crabbing,” where the handler applies pressure toward the horse’s ribcage, and the horse moves all four feet, and moves his legs over and across, away from the handler. This was all done inhand, without the use of round pens.

“So often we’re pushing these horses on top of us,” Chris says.

“We are thinking we’re not, but we are. We’re creating that, and you have to change your angle. If you’ve ever roped at all, you can just change the plane of your rope just a little bit, and it makes a huge difference on whatever you’re doing. If you change the angle on your horse, knowing the body position, what you’re pushing, the eye, the shoulder, the ribcage, and how it’s all working, it helps.” 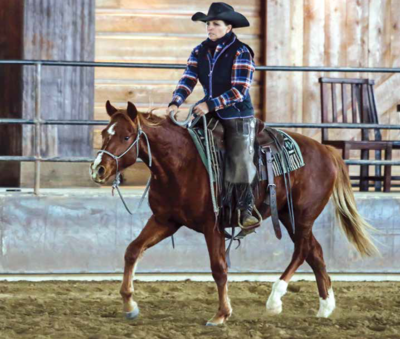 In short, gentle sessions, handlers like Mary Davis were able to give the young horses an easy start.

ONCE JED HAD THE HORSE WILLINGLY MOVING FROM BOTH SIDES, the handler “snaked” the lead rope over the horse’s back to prepare him. The next step was sacking out with the saddle pad, and then very quickly, the saddle.

The colt stood calmly throughout the whole thing, as Jed moved in a smooth, coordinated way, putting the saddle pad on, taking it off and putting it back on. He did the same on both sides. When he had put the saddle on and taken it off several times, he smoothly cinched it up just tight enough to keep the saddle on. The colt stood quietly and willingly on a loose rein. Once he was cinched up, Jed returned to moving the colt’s feet. The horse was a little stiff in the hind legs, and that was immediately Jed’s priority to fix.

“I never want to push (the horse) forward until I get this softened up right here, or we’ll run into problems,” Chris says.

Soon, the colt softened. Then Jed began jumping up and down, tugging a little on the saddle and stirrups to prepare the colt. This also was done on both sides. Next was stepping up and laying across the saddle, on both sides, another step met with quiet acceptance.

Then the big moment – Jed swung aboard. The preparation had taken, perhaps, 15 minutes in total. The colt remained calm throughout.

Chris, mounted on a saddle horse, helped push the colt forward using a flag, and the horse stepped off, feeling a rider on his back for the first time … and was completely calm.

The colt trotted, then loped, around the arena, while a smiling Jed rubbed the horse on his neck and hindquarters, reassuring him. They changed direction and moved the other way before Jed stopped the colt, rubbed him some more, and then got off and unsaddled.

And just like that – with a 20-minute session and nary a dramatic moment – Catchy Reys had been started on a long and promising career.

The other riders would quickly follow suit with their horses, getting them all started under saddle before they would begin introducing more advanced concepts to their young pupils in the coming days.

Complete Article Click Here for PDF
Check the Fall issue of the Ranch Horse Journal for the concluding part of this series.