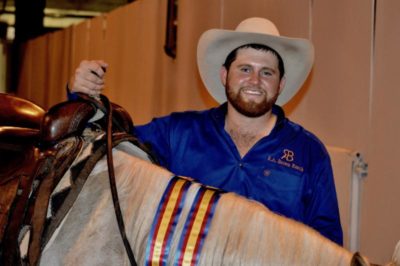 Article provided by National Reined Cow Horse Association – NRCHA Snaffle Bit Futurity – October 14,2017 – Lanham Brown had to overcome a tragedy to be triumphant at the 2017 NRCHA Snaffle Bit Futurity, but with a little help from his friends, that’s exactly what the second year competitor did. Riding This Shiney Miss, a horse that was gifted to him by Wagonhound Land And Livestock, Brown marked a composite score of 638.5 to be the Intermediate Non Pro Champion, the  Novice Non Pro Champion and place third in the Non Pro for check amounting to $23,103.

“It’s a great accomplishment. It’s something that I’ve looked forward to all year although it’s the journey, of training her throughout, that I’ve enjoyed the most. I’m really proud of this mare,” Brown said.

The journey for Brown and This Shiney Miss (WR This Cats Smart x Shiney Miss Hickory x Shining Spark), who was worked as a 2-yaer-old by Matt Koch and Matt Frederick, began a year ago when he got a call from Wagonhound Land And Livestock in Douglas, Wyoming.

“I’d gone up to Wagonhound and helped brand last summer,” Brown said. “They called me after I lost a mare that I showed at the Snaffle Bit last year and said, we hate to hear it but if you come pick this mare up, we’ll give her to you. I can’t thank Wagonhound enough for their support and generosity.”

Brown and This Shiney Miss marked scores of 209 in the reining, 218 in the reining and 211 in the cow work. It’s the mare’s grit that Brown likes most about her.

“The heart that she showed is what I liked most about her here. It’s been a long week and she never gave up on me. When they’re in these little stalls and walking around on concrete, it’s easy for them to get tired but she stayed strong and with me the whole time,” Brown said. “This mare reins around real good and I think she’s got a lot of upside that we haven’t got to yet. We’ll give her a little time off, let her get strong and I think she’ll come back even better.”

Brown attends Texas Tech and is involved in his family’s ranching business. He and his cousin, Myles Brown, who won the 2017 NRCHA Snaffle Bit Level 1 Limited Open and the Limited Open championships,  both started competing in reined cow horse at the same time.

“We point out each others faults quite well but we’re also each others biggest supporters. We work with each other and try to help each other out when we can. We’re both really green but we’ve both been blessed with some really good horses,” Lanham said.

Lanham would like to thank his parents, Donnell and Kelli Brown, for their support as well as all the trainers, including Matt Koch,  who have helped him learn about training cow horses.