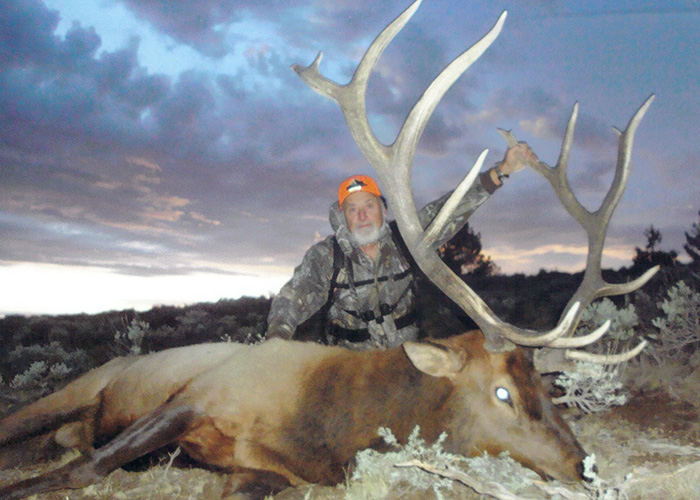 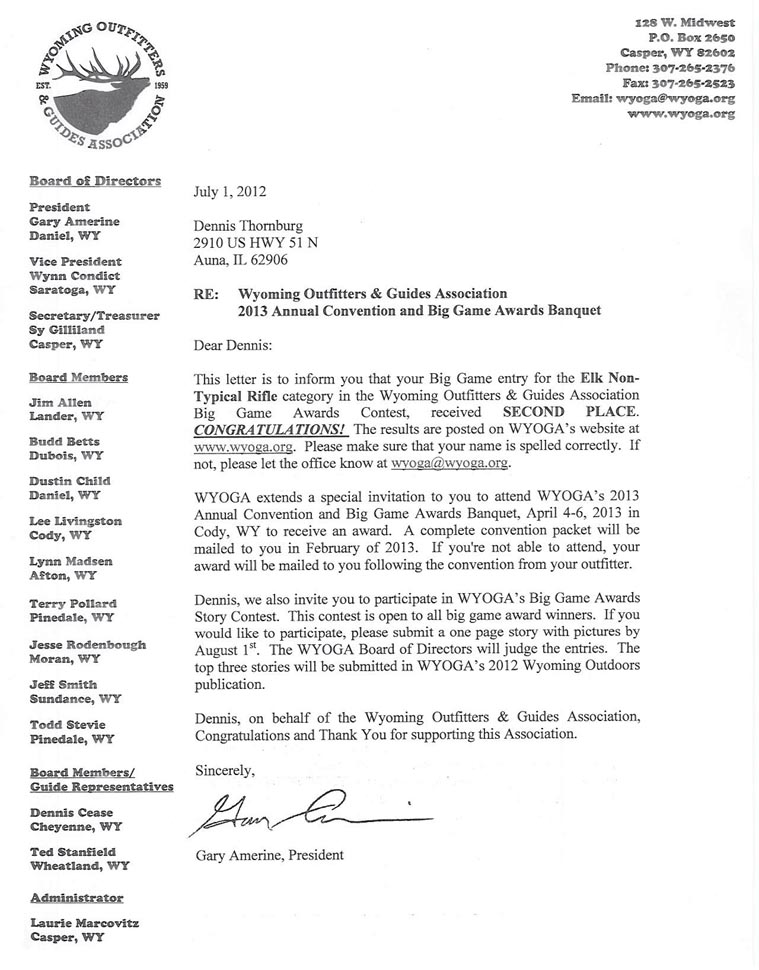 and my hunting partner of 30 years, that we had drawn elk tags in Wyoming. The previous year, Vernon Anderson (better known as V-Ray to family and friends) and I had booked an elk hunt through Cabelas Tags with Laramie Peak Outfitters. We didn’t get drawn that year so our hunt was postponed to 2011. A phone call to Outfitter Dax McCarty informed us that even though Laramie Peak was now a part of Wagonhound Outfitters, there was no problem; we would be hunting elk in Wyoming come October 15! V-Ray and I both are old farts. He retired after 30 years as a wildlife biologist with the Kentucky Fish and Wildlife Department and resides in Murray, Ky. I retired after a similar career with the Illinois Department of Natural Resources and the Shawnee Hills of southern Illinois have been my home for 40 years.

On the day before our hunt was to begin, our guide Jamie Anderson met us at the motel in Laramie. After introductions we followed Jamie north out of town. After a stop for cheeseburgers and fries we made another stop to make sure our rifles scopes were dead on, we arrived at drop camp, nestled in and aspen grove at the base of the Laramie Mountains. Ted Babe our cook and wrangler was there with the horses and good smells of dinner in preparation were already coming from the cook tent. That evening was spent laying out gear for that next day’s hunt and sleep that night was replaced by excited thoughts about the hunt that was just a few hours away.

At 4:00 a.m., we were in the cook tent with a cup of hot coffee in our hands and Jaime was explaining that the plan was to hike about 4 miles before daylight to begin hunting at dawn from a high overlook and then work our way back in the direction of camp. Shortly after the sky lightened in the east, it was apparent that it was a good plan. Several small herds of elk were feeding through clearings on the slopes below us. After a couple of hours of glassing, we spotted a nice bull in a herd of about 20 elk, moving toward the top of the next mountain to the north. V-Ray had first shot and he decided that the bull was worthy of a stalk. As we approached the vicinity where we had last seen the bull, he was bugling about every 5-10 minutes. As we slowly closed in, however, he shut up and we were undecided as to which side of the peak he was on. Jaime placed V-Ray in position where he thought the bull would come over if he was on the other side, and we crossed over the top and circled around. As we eased back up to the ridge peak, we saw elk moving ahead of us, and in a few minutes we heard the blast of V-Ray’s 340 Weatherby echoing through the hills. As it turned out, V-Ray had missed a decent shot at the bull, and since he had taken a nasty fall in the dark earlier in the morning, Jaime decided that he should return to camp and shoot his rifle to make sure his scope had not been knocked off center. Jaime and I hunted and glassed elk the rest of the day. I was amazed at the number of elk we saw but all of the bulls were smaller than I wanted to shoot, especially since it was only the first day of the hunt. As the sun was setting low in the western sky, Jaime suggested that we return to a ridge where we had seen some cows bedded earlier in the afternoon. There was no elk on the flat, but as we stood there glassing, a deep-throated bugle echoed across the valley from the next ridge over. Jamie checked his watch and said if hurry, we can be over there before the close of shooting hours. At a trot, we were down the mountain and climbing toward where we had heard the bull sound off. The top of the ridge was broad sagebrush flat with spruce timber along the far side. As we eased up behind a rock about the size of a pickup truck bed, a bull bugled out on the flat. A small bull was trotting across the flat towards the timber. Jamie had no more said, “I don’t think that is the bull we heard earlier”, when a nice bull came charging out of the timber to challenge the smaller bull. After studying the bull with his binoculars for a few seconds, Jamie said, “I think that’s the bull you want; he has a split 4 on one side, and I believe he’s a 7×7.” He was already reaching for his range finder. After chasing the smaller bull off, the bug bull stopped, laid his antlers back on his back, and sounded off with a triumphant bugle that was picture perfect.

As long as I live, I’ll never forget the next five minutes of that day. The conversation on that mountain top in Wyoming went something like this.
Dennis: how far is he?
Jaime: (Whispered something unintelligible)
Dennis: “How far??!!”
Jaime: No response (he was focused on the bull with his binoculars).
Dennis: “Jaime how far did you say?”
Jaime: (Again, something unintelligible).
Dennis: “how far”?
Jaime: With a look that said, are you deaf dude? Held up 3 fingers and then made on “0” twice with his thumb and forefinger.
With that said I smiled gave him the thumbs up, chambered a round, cradled my rifle across that rock solid rest, clicked off the safety, and squeezed the trigger. My heart nearly stopped and panic nearly set in when the bull showed no signs of being hit, and instead turned and ran straight away. Thankfully, he ran only a short distance before stopping and turning broadside once again. Jaime said, “You shot over his back.” Lowering the crosshairs slightly from my previous shot, I touched off a second round and the 180 grain Barnes VOR-TX bullet from my Ruger 30-06 struck home. The big bull crumbled without taking a step.

Sometimes, when walking toward a downed animal, you find that he is not quite as big as you earlier thought when looking at him through binoculars or your rifle scope. Just the opposite was true with this bull. As Jaime and I approached, we were both surprised at the massiveness of this bull. Each antler was nearly 10” around at the base, and interestingly, the antlers were offset. One antler was attached to the skull nearly 2 inches higher than the other, yet both had grown equally well. He was indeed a unique and magnificent animal. As the day drew to a close, with a beautiful sunset in the western sky, I whispered under my breath, “Thank you Lord for being so good”, and I said to Jaime, “It just doesn’t get any better than this!”

Postscript to this story – this old monarch had no front teeth so he couldn’t be aged, but his back teeth were worn smooth, so he had to be quite old. After Whitetails and Waterfowl Taxidermy in Murphysboro, Illinois, performed their magic, the shoulder mount of this majestic animal now hangs on the front wall of the rustic, open space dining room at the lodge in Giant City State Park, in the heart of the Shawnee National Forest of southern Illinois. It is a fitting location, where thousands of people can admire the beauty of this wonderful bull. Oh, by the way, V-Ray got a nice 6×6 on the last day!