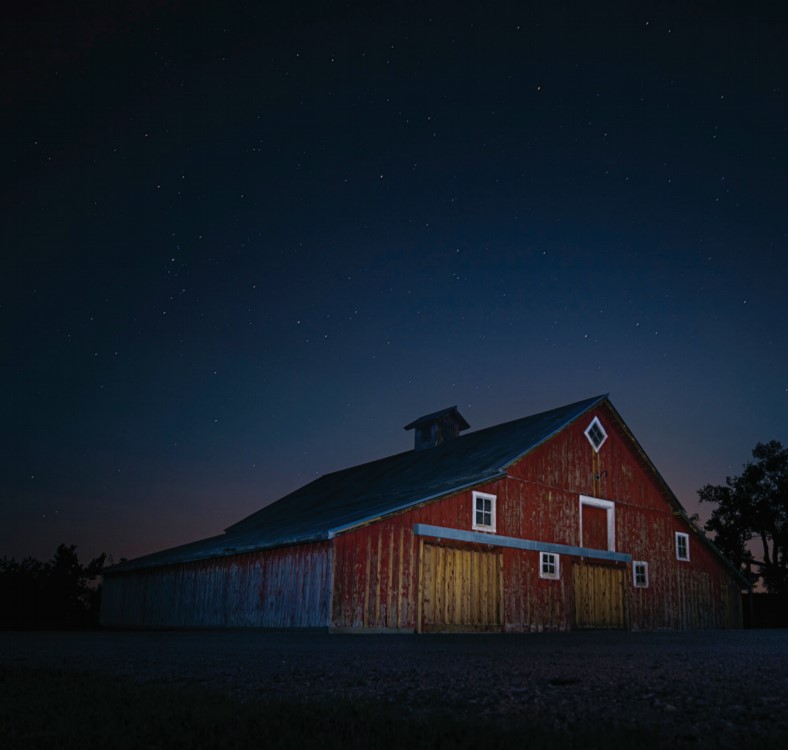 You can find both quietude and fortitude on an annual cattle gathering in the mountains of Wyoming’s Wagonhound Ranch.

The best description of a cowboy that I’ve heard came from a cowgirl as we were making our way back off the mountain after gathering part of the Wagonhound Land & Livestock Co. herd in October 2020. Heather Sanchez, Wagonhound’s equine breeding manager, said, “You know what the opposite of quitter is?” I shook my head no, and with a smile, she replied, “Cowboy!”

It was my second day on the mountain, and we were making our way back to cow camp after an amazing, and exhausting, 20-plus miles horseback attempting to gather 2,500 head of Red Angus. In my group was ranch general manager Dustin Ewing; ranch hand Jonathan Peachey; Heather; and ranch owner Catherine Nicholas. Two other groups were working different areas of the mountain.

The 300,000-acre Wagonhound ranch is located just south of Douglas, Wyoming. As the owners since 1999, Art and Catherine Nicholas have had tremendous opportunities for land purchases over the past two decades, leading to significant growth in the ranch and its Red Angus cattle herd. Dustin has overseen it all.

The curious thing about the description of the word cowboy is that it evolves, and yet, somehow, remains the same. When I asked Dustin how he’d describe what the word means to him, a few words came up that have been repeated over generations. Words like “integrity,” “hard-working” and “honest.” Dustin went on to say that he believes a cowboy’s traits also include adaptability and being multifaceted. They do what it takes to get the job at hand done, and they don’t quit. Think about that word for a moment. What does it mean to you? That’s where this story begins. I had heard that the Wagonhound gathered cattle off the mountain once a year before winter hit, and I thought it would be a great opportunity for photos. What I didn’t expect was that the trip would be so good for my soul.

What does peace and quiet look like? Better yet, what does it feel like? As Dustin and I were making the long drive up to cow camp, I asked him just that. Without hesitation, Dustin took his right hand, extended his finger and pointed off in the distance to our destination. There were some mountain peaks on the horizon and a sea of sagebrush before us. He said, “That’s my peace and quiet.”

The curious thing about the description of the word cowboy is that it evolves, and yet, somehow, remains the same.

For many, a day or even a few hours horseback can recharge us. There’s a calming sense that one gets as you stand out in wide-open spaces with your horse. Here at the Wagonhound ranch, there’s no shortage of wide-open spaces. There’s a quiet rhythm and a peaceful harmony that comes with being, well, without. Without those daily distractions we’ve become accustomed to, like our cell phones. Out there on the mountain, where there’s no service, it’s just you and your horse, the quietness and maybe a few cows.

As we rode throughout the day, everyone I visited with, including Catherine, said many of the same things about being out horseback and away from it all. When all goes right, there’s a calmness in riding and working that’s felt, even if you’re up well before the sun and back after dark. It’s fulfilling, rewarding and good for the soul. Some might say it’s almost an escape, especially for the times we live in now.

For many, a day or even a few hours horseback can recharge us. There’s a calming sense that one gets as you stand out in wide-open spaces with your horse.

I began to write this while I was sitting at an old picnic table just off to the side of the main cabin at cow camp. We had come back from a five-and-a-half-hour journey moving the first bunch of cows, riding in just before dark. The sounds of laughter were coming from the porch as some of the crew joked with one another. Their laughter mingled with the sounds of spurs as they walked up and down the wooden porch stairs, the popping of soda cans and the screen door shutting as others were moving in and out of the cabin before dinner. It was at that moment, as I tuned in to the sounds of life at camp, I put my pen to paper. That’s where I found my peace and quiet, the rhythm of life at camp.

There are some things that are still untamed in this world, like the feel of being in the saddle for eight, 10 or 12 hours. Or feeling the last of the sun’s warmth on your face as it fades on the horizon just as you ride back into camp. The bond and the trust between horse and rider, knowing that between the two of you, nearly anything is possible. The camaraderie and laughter that’s anticipated as you ride back into camp after a long day. I imagine these are some of the things that folks have felt for many generations, and likely what keeps them coming back. No amount of machinery could replace this.

The drive out to cow camp was almost two hours, primarily on gravel roads, from where I was staying at the ranch. Once we arrived, we all started setting up the sleeping quarters. For the ranch hands, it was canvas wall tents with cots and bed rolls; for me, a canvas cowboy teepee with a cot and bedroll. Prior to my journey out, I was warned that it was going to get cold, although nothing like what it was last year, when a wicked Wyoming snowstorm descended on the camp as ranch owner Art Nicholas and Dustin made it up there. They saddled up and broke trail together. Dustin chuckled a little as he described the snow and cold, but the warmth of the story came as he described the feeling of fulfillment in breaking trail and getting the job done. I was thankful we didn’t encounter any rogue winter storms this go-round. The weather at night did get cold, down to 20 or so degrees, but wrapped in my bedroll, inside the teepee, the cold didn’t disturb my sleep.

As the rest of the crew made it into camp, the portable corrals for the horses were set up, and the crew helped unload the food from the pickup so we could have lunch before heading out.

After lunch, everyone saddled up, and hooves hit the ground as we made the initial ascent into the Laramie Mountains. In many ways, things haven’t changed much out here. People are still required to get on their horse, find the cows and move them to a predetermined location. Sounds easy, right? As anyone will tell you, it rarely happens just like that. How gathering gets done in the mountains is another story. It can be slow going, as is expected, when you’re not putting unnecessary pressure and stress on the herd. Out here, with the help of great horses, great people and their dogs, we were able to move a significant number of cattle on our first day.

The wide variety of terrain in the mountains calls for a steady hand and horse. Wagonhound’s horses are not only bred to be proven in the show pen, they’re readily proven on the mountain, as well. They’re handy at getting across creeks, tackling steep climbs and anything else they’re asked to negotiate in the course of a day’s work.

Ranch riding or versatility patterns are designed to simulate an environment that a ranch horse could encounter. Undoubtedly, we encountered nearly all of them on this trip, including puzzles of logs that weren’t laid out by an arena designer.

The blood that pulses through the veins of the Wagonhound ranch is made up of each of the personalities who work there. From those who look after the cows and horses, to those who work the land, and those who outfit.

At one point, there was an extremely narrow passage along the trail that required single-file movement with easy pressure. Leaning forward and resting on my saddle horn, I had the opportunity to capture some images of the incredible terrain we were in.

As we rode, I couldn’t help but think of all the work and time that each ranch hand puts into his string of horses–the time and effort put into acclimating the horses to just about everything. At the end of the day, the cowboys need a good horse they can depend on. Wagonhound horses easily fill that bill. In 2018, the ranch was awarded the prestigious AQHA Best Remuda Award, which honors breeders of great ranch horses.

As I lay in the dirt late at night, my camera on a tripod, photographing one of the original barns on the Wagonhound, I couldn’t help but tune in to the sounds of coyotes. For a moment, I stopped what I was doing just to listen, just to be in the moment. They suddenly stopped, and a few seconds later, an elk started to bugle. That was my first night, prior to cow camp, and my introduction to the Wagonhound. I smiled, shook my head and kept on shooting while listening to an orchestra of animals.

The blood that pulses through the veins of the Wagonhound ranch is made up of each of the personalities who work there. From those who look after the cows and horses, to those who work the land, and those who outfit. In numerous ways, Art and Catherine have kept a way of life going for many people who prefer the rugged terrain, rogue snowstorms and the peace and quiet that come with untamed traditions.