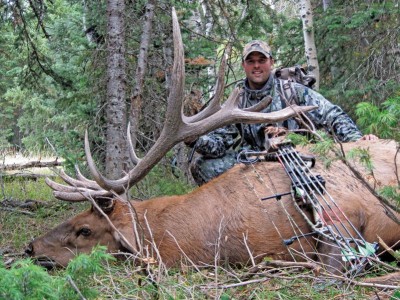 Three Years Is A Lifetime

Home | Three Years Is A Lifetime

I’m truly blessed to do what I love for a living, managing the outfitting for a large ranch in Wyoming. My family and I are blessed to live there and enjoy all aspects of ranch life.

In the beginning, I taught science for eight years while guiding on the side. After working as a guide for several years, I got my outfitter’s license and started a small outfitting business with my good friend, Jamie Anderson. We leased land in the heart of some of the best elk hunting in Wyoming.

We were in our second year when my wife Dee Ann and I learned we would be expecting our first-born near the second week of archery elk season! Thankfully, I have an amazing wife, so I knew we’d get through the season somehow. I soon found out I had drawn a tag in our elk area. Now I had to decide how I would serve my clients and still fit in time to bow hunt while waiting for our new addition.

Near the end of August, the doctors assured us that Dee Ann’s due date of September 13 was fairly certain. That meant I was safe to hunt opening day, right? With my wife’s blessing, I took September 1 off from school and spent the day hunting on my own tag, since we didn’t have hunters until later that month.

I didn’t have cell service until I got out of the mountains that evening. As I checked my messages, I experienced the biggest spike in heart rate I’ve ever had! The second voice mail I heard was my friend Dave saying, “Dax, I hear Dee Ann’s in labor. Call me…Bye!” I was the worst father/husband ever, and I hadn’t even met my kid yet!

I sped down the county road while trying to reach my wife on the phone – no answer. I tried Dave – no answer. I felt a little relief when my mom said she hadn’t heard any news of Dee Ann at the hospital. Simultaneously, I had a call from Dee Ann, who informed me she was out walking the dog; not in labor. 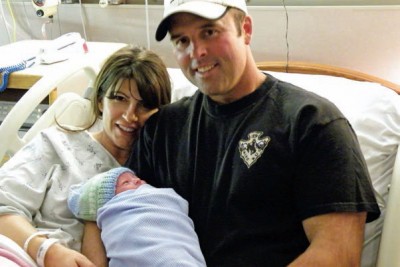 Because I was off work and my students knew we were expecting, a rumor started that cost me at least a year off my life! The ironic thing? Dee Ann went into labor the next morning and our son, Tanner, was born that next evening. It was hands down the best experience of my life!

I spent the next week with my family, enjoying life’s greatest blessing. Still, I had that tag in my pocket and a short window before I’d be guiding clients. It was bittersweet leaving the house for camp that  evening. I told my wife I’d kill a bull for Tanner the next morning so I could come home and be with them before clients showed up.

Jamie and his son, Cody, joined me that morning. Tanner was now eight days old. We left camp and slowly worked in on several bugles as the elk headed into some thick timber. We could tell that the bull we were trying to coax out of his bedroom was reluctant. I decided to ease in closer while Jamie kept him fired up.

I started into the timber and worked toward the bull that sounded the most dominant. I moved slowly through dense, downed timber, keeping my eyes peeled for movement or brown bodies. The timber was so thick that all I could make out was the rump of an elk five yards to my left. I waited for that elk to pass and then inched forward into more open timber.

The bugles sounded closer but less frequent, so I moved with more caution. Thankfully, the timber opened enough to nock an arrow. I heard a bull raking a tree to my right, but the bull I was moving in on was to my left.

I quickly scanned in front of me to see if I had a window to shoot through. I instantaneously heard him bugle and saw the heavy back end of his rack. The bull I’d been keying on was moving from left to right toward the bull that was raking the tree. I drew my bow and focused on a two foot window that was in line with the path the bull was taking toward the other elk. I estimated the distance at just over 20 yards. 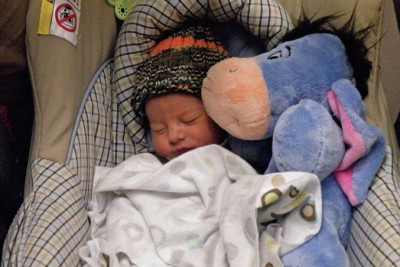 “Spending time with my kids is the most rewarding part of my life, and spending that time outdoors will always be a priority.”

Just as the bull stepped into the opening, I shot. I was confident the arrow hit the bull, but I wasn’t sure where. I sat down right there and figured on a long wait since I wasn’t sure of the hit.

Eventually, with a little cow-calling to guide them in, Jamie and Cody found me. I explained how it happened and tried to describe what I saw. After a long wait, we continued toward the bull and found him near the edge of the timber.

He was a big-bodied bull with a light red hide and five points broken from fighting. All four fronts and the fifth tine on his left side were broken. This heavy- antlered, ten-year-old bull was definitely a warrior and a great way to end one of the best weeks of my life.

Can A Three-Year-Old Hunt Elk?

Three years later, I had just finished guiding my last client for the season and Tanner had just celebrated his third birthday. I had also drawn a tag for the area once again, and had an evening to hunt.

The one and possibly only downside to my job is that I don’t get to see my family as much as I’d like during hunting season. I mentioned to Dee Ann that I wanted to take Tanner with me and that I was heading out around 5 p.m. Dee Ann took him to a birthday party earlier that day, so I thought his hunting plans might be foiled by party hats, toys, and cake, but when Dee Ann asked him if he wanted to go hunting with me, he picked up his coat and told grandma he was going hunting! 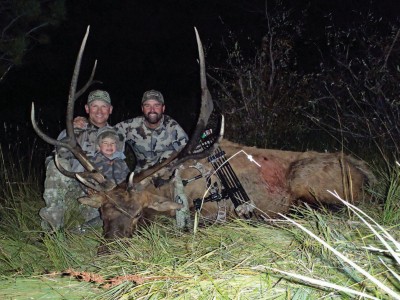 A hunter and his son come full circle in just over 1000 days.

We outfitted Tanner in camo and left to pick up our friend, Matt Kelly. I wanted Matt to wrangle Tanner if I had a legitimate chance at a bull that evening! Honestly, I didn’t give us much chance, since Tanner’s little legs can only go so fast and so far (and his noise level is somewhat elevated), but I looked forward to having the chance to spend time with him outdoors.

We soon spotted a bull lying alone at the base of some rocks. I decided to stalk him while Matt and Tanner hung back and called. Tanner insisted on carrying my bugle and helping Matt call! I started in front of my “guides” and worked my way to where I thought the bull was, but I couldn’t see him. I went a little farther and let out a few cow calls to see if I could get an answer. I did.

I heard Matt and Tanner bugle, so I turned around and headed back to meet them. Matt had seen the bull working above him and into another draw, so we decided to come in from another angle. Tanner was a trooper and had only high-centered on one piece of sagebrush while following Matt.

We headed up the valley and into the trees where we expected the bull, but then a lone bull walked out across the canyon from us. Tanner and Matt were 40 yards behind me when Matt began calling. The bull immediately answered and started down into the canyon toward us. I was behind a small limber pine, with a large boulder to my left. I’d have to use the tree as cover to draw if the bull came all the way, because he would be in open country.

Every time Matt let out a cow sound, the bull answered and came closer. I couldn’t help but wonder what Tanner was doing and thinking, and how much “help” he was to Matt. 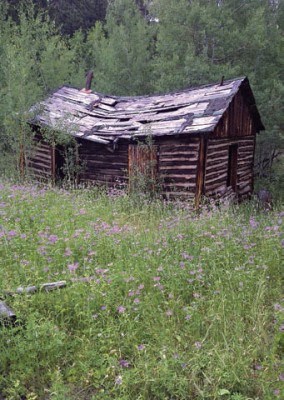 “Spending time with my kids is the most rewarding part of my life, and spending that time outdoors will always be my priority.”

As the bull headed down into the canyon, I lost sight of him, but he soon crossed into the open grass and sage. I was pinned behind the rock and had to wait to draw until the bull got to my left.

Matt later told me that when the bull was 50 yards out, he grabbed Tanner, who was standing next to him. He asked Tanner if he could see the bull (which was trotting and screaming), and Tanner calmly said, “Yep.”

Just as the bull passed to my left and went out of sight behind the rock, I slowly drew my bow and stood. He was still locked onto Matt and Tanner, looking for a cow. I let out a whitetail grunt and he stopped, slightly quartering away. I put my top pin on my target and squeezed. He then spun around and headed down and out of sight. I knew the shot was good and that he wouldn’t go far – a plus for the amount of light left and my backup guide’s short legs.

Matt and Tanner appeared from the trees behind me, and we high-fived. I guess Tanner knew that meant he could start squealing on the bugle. As we eased down that direction, Tanner kept up his calling and followed us. We soon found the bull in the grass in the bottom of the swampy draw.

This was easily the most meaningful hunt of my life! I’ve always valued the outdoors, our hunting heritage, and what it does for people young and old. It teaches our kids respect for the outdoors, for animals, and for each other.

In the eight years I taught school, I noticed how well-behaved and respectful the kids were whose parents spent time with them, whether in the outdoors or in other facets of life. Spending time with my kids is the most rewarding part of my life, and spending that time outdoors will always be a priority.

Hopefully my son and I go on many more hunts together. Not all will end with a great bull, but time spent putting in miles and teaching my children that hard work pays off is my goal. I now also have a daughter, Brooke, who will be right behind her brother Tanner very soon!