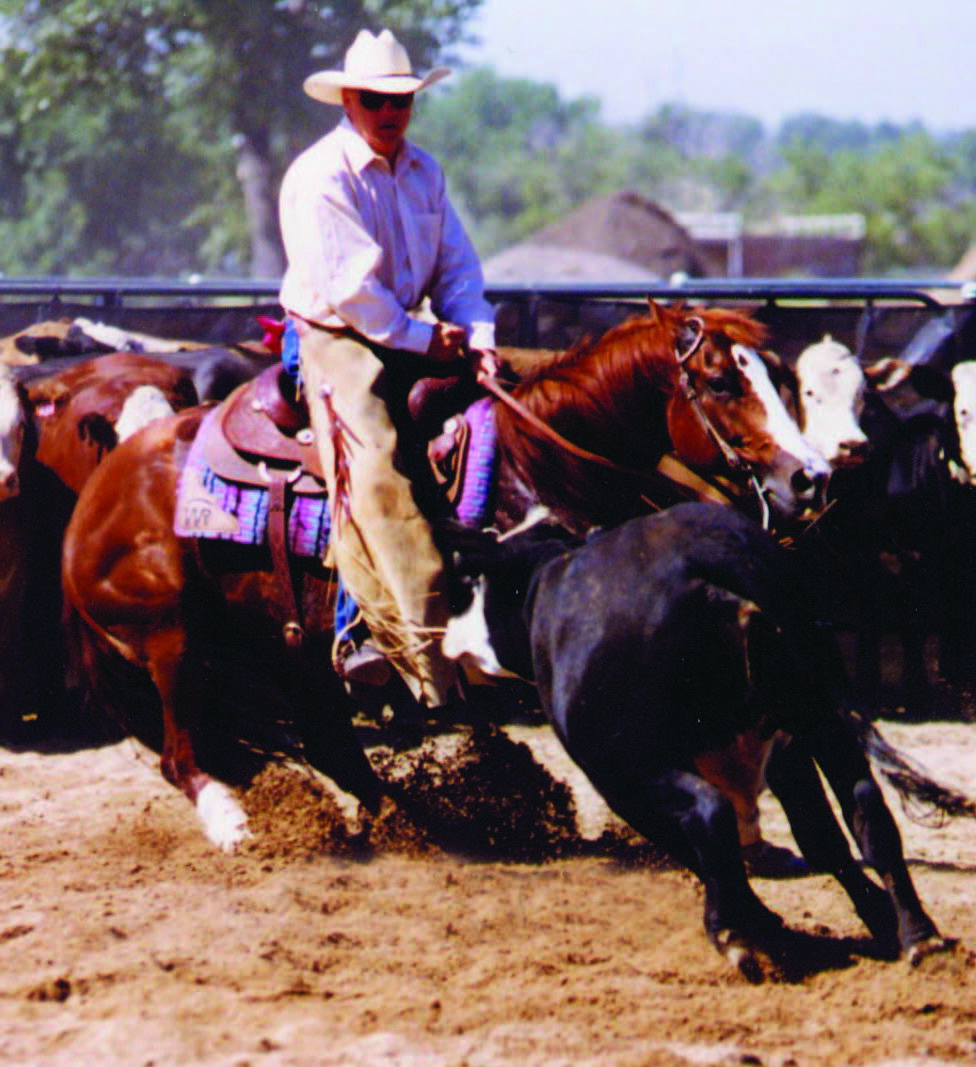 Owner Julie Wrigley, who bought The Smart Look in 2013 at the Strawn Valley Ranch Dispersal Sale, relocated the broodmare two years ago from her then-home at Colorado State University (CSU) to Wrigley Ranches. The Smart Look seems to realize she is the queen bee of the 150-acre facility at Silverado on the Brazos.

“While she often is somewhat cranky, she looks and is doing great,” Wrigley said. “We think she knows she is special, being the matriarch and overseeing the ranch. Those who know her and the vets who care for her are amazed at her condition.”

Wrigley went to the Strawn Valley Ranch Dispersal intending to buy one of The Smart Look’s foals, but instead bought both the mare, who sold with her weanling Metallic Cat filly, for $85,000.

“It was apparent to me that I would not be able to own another living legend like her in my lifetime,” Wrigley said. “It also was important to me to have this elegant old lady live the rest of her life in a very special place.”

The Smart Look spent the final years of her breeding career living year-round in Colorado. She was brought back to Texas after the decision was made to end her production years.

“She’s an ’88 model, so there comes a time when you by far have outdone your duty and you’ve paid your dues and you deserve to just be,” said Wrigley Ranches Assistant Manager Jake James. “So, that time had come and everything just aligned, and we thought we could provide the best quality of care for her down here.”

James still sends updates and photos to the mare’s former caretakers at CSU, where he said she was stalled next to supreme show mare and fellow leading NCHA producer Meradas Little Sue. That mare, also sent through a sale in her sunset years, now resides at Circle Y Ranch in Millsap, Texas.

SVR Look Cat Me, the Metallic Cat filly that Wrigley bought with The Smart Look, is The Smart Look’s final foal. She also resides at Wrigley Ranches, in addition to The Smart Look’s yearling clone, I M Smart Too. SVR Look Cat Me, aka “Cookie,” was started under saddle by trainer Hunter Meinzer at Wrigley Ranches and is being pointed toward the NCHA Futurity. She is a full sibling to West Texas Futurity Open Co-Reserve Champion Sannman, who has earnings of $148,587 through the end of 2015 and continues to show this year after standing his first season at stud at SDP Buffalo Ranch.

For Meinzer, it is an honor to ride the last foal out of a storied broodmare like The Smart Look.

“It’s one of those things that not everyone gets to say or gets to do, to ride the last filly or colt out of a legend like that,” he said. “I hope it turns out. It’d be a cool ending to a legacy if the last one made it.” He said Cookie is quick, cowy and very attentive.

“She’s a little quirky, which is, I think, a good thing. She’s not scared of everything, but she’s always just looking around – real alert,” said Meinzer. “I think that comes with being a good cow horse – just always attentive and knows where she’s at.”

James said SVR Look Cat Me and the other offspring of The Smart Look that he has encountered tend to be more laid-back than their mother, but all seem to have the same conformational soundness as their dam.

The Smart Look’s solid constitution served her well in her own cutting career, where she compiled earnings of $48,723 in eight years of showing.

She started by making the Open finals at the 1991 NCHA Futurity with George Stout and then made the Non-Pro finals at the 1992 NCHA Super Stakes and NCHA Summer Spectacular. She didn’t record any earnings in 1993, but continued her career in 1994 with long-time owner Tom Wiens. The Smart Look and Wiens competed for five
more years, mostly in Amateur and Non-Pro classes, until she retired in 1999 at age 11.

“She’s kind of that foundation breeding with a lot of bone and just conformationally sound,” James said of The Smart Look. “She has a slight little stifle problem, just from age, but other than that, there’s nothing that slows her down.”

James said the mare’s yearling clone, whom ranch staff have nicknamed “Windy,” acts more like The Smart Look than the 28-year-old producer’s offspring do. Windy also has some physical attributes, such as the bone structure in her head, that are nearly identical to The Smart Look.

Though she realizes it’s a somewhat unusual move, Wrigley intends for Windy to get the chance to test her mettle in the show pen. Few clone owners have taken that risk.

“Though I know most clones are not shown, it will be interesting to see how talented she is under saddle,” Wrigley said.

Another show mare, Pippis Longstocking, occasionally joins The Smart Look in the pasture after she is done training for the day. Given The Smart Look’s age, the ranch is quite selective of her pasture mates. “I don’t want to risk the well-being of her just in case somebody was to go after her or something,” James said. “We protect her pretty well.”

He said the mare is happiest when she’s in her two-acre pasture. Fittingly, when the richest living NCHA producer isn’t eating grass or lounging under large oak trees, she’s often closely monitoring the activities of foals in the pen next door.

“She is obsessed with babies – loves babies – and gets very possessive of one individual or one horse each time,” said James, adding that the mare serves as the foals’ babysitter. “And, once that’s her chosen one, she will do anything to stay next to it.”

The Smart Look has a double stall with two large fans to keep her cool, but she doesn’t like to go inside and can be nearly impossible to catch. While she may be old, she still has plenty of spunk.

“She will run around the pasture like a 2-year-old and not want to be caught,” James said. “She has to wear herself down before you can catch her. She just still has that much energy at her age.”

The goal is to keep her healthy and happy at Wrigley Ranches for the rest of her life.

“I think she went to the best home possible that keeps the best possible interest for her in mind and is the best place that will preserve and promote her legacy, all while keeping her health and well-being as a priority at the forefront of everything,” James said. “And she has a forever home here.”