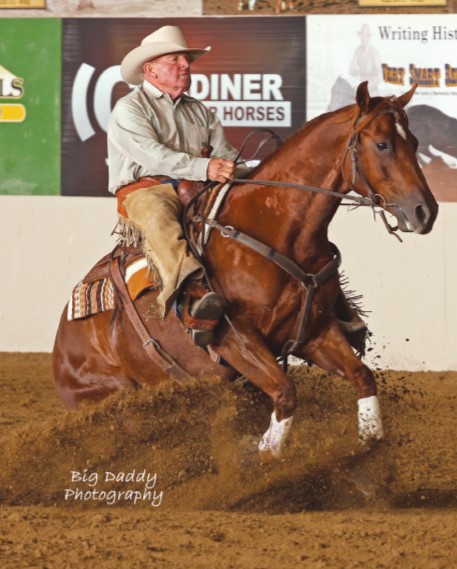 You might have thought Gene Armstrong, a multi-talented non-pro competitor from Paso Robles, Calif., would be carefully pampering his good horse, No Foolish Cat (WR This Cats Smart x Lean Acre Doc x Bob Acre Doc), in the show barn in the weeks prior to the National Stock Horse Association Futurity and Derby. You would have been wrong. 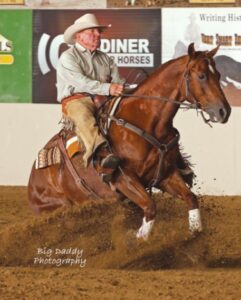 “He’s a using horse,” exclaimed Armstrong as the Derby Non-Pro ended. “We just got off of a weeklong pack trail ride into pretty tough country, 15 miles back into the east side of the Sierras.”

The accomplished farrier and retired Cal Poly professor of animal science likes to do it all on his horses. “I’ve roped on him and done some ranch work. He’s a really easy guy to show and to ride,” Armstrong said. His methods paid off, with Armstrong and his horse capturing the Reserve Championship in the NSHA Derby Non-Pro, Intermediate and Novice.

“I was careful because I knew I had to show him here,” Armstrong said of his pack trip. “He really wants to be a show horse.” Armstrong acquired No Foolish Cat as a long yearling after spotting
him on another ranch the year before as a foal. He trained the horse for the 2010 National Reined Cow Horse Association Snaffle Bit Futurity, where he placed third in the Intermediate
Non-Pro and eighth in the Futurity Non-Pro. Even with the frenetic activity at Reno, his young horse took it all in stride.

“He was so quiet at that big event,” Armstrong said. “He just laid down and slept during the night. In the morning, you almost could take him straight out of the stall and right into the show ring.
He’s just always been that way.” Armstrong, with lifetime Equi-Stat earnings of $69,372 prior to the NSHA Futurity and Derby, has been showing horses since the 1960s.

“I didn’t ride as much of my own horses during the 35 years at Cal Poly because of the busy teaching schedule,” said Armstrong, who taught farrier science, colt starting classes and other courses
in the Animal Science Horse Program.

When he retired from Cal Poly in 2002, Armstrong tried to make up for lost time in the show pen, as his rising earnings reflect. No Foolish Cat has now won $22,349, according to Equi-Stat.
“I’ve had some really good horses in my life, so I am hesitant to say he’s the best one, but he might be. I’m so excited about this horse,” he said. “He is just a wonderful horse and gets better and better as time goes on.”

This quiet-spoken, ranch-raised, do-it-yourself horseman likes to keep three riding horses going at any given time. He now also has an up-and-coming 2-year-old WR This Cats Smart gelding out of
his good show mare, Nu Femme Fatale (Nu Cash x Badana Doc x San Juan Silver [TB]), who earned $20,546 from 2002 to 2007, according to Equi-Stat. While he starts and trains all his horses
himself, he takes opportunities to ride with the wealth of cow horse and cutting professionals in the region to fine-tune his knowledge of stock horses.

“It’s a humbling sport,” Armstrong said. “The more I think about it, the more I think most errors are pilot errors.” His general philosophy on training good cow horses includes keeping them sound and trying to improve skills each day. “I think you need to allot plenty of time to ride them, and always try to be fair with the horses,” he said.

But for Armstrong, it’s not really about the competition or the event. “It’s all about the horsemanship, and improving on that,” he said. “That’s what is most important.”