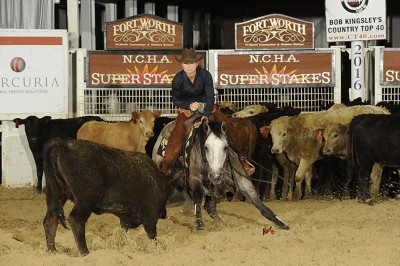 It was two grey horses that made a statement in the Lucas Oil NCHA Super Stakes Non Pro finals last night! Watch Me Whip ridden by Armando Costa Neto marked a 222 and kept the Triple Crown hopes alive being Co-Champion along with Velvets Revolver (by WR This Cats Smart) and Nadine Payne also marking a 222 later in the finals. Watch Me Whip (Playgun x Look The Look) was the 2015 Non Pro Futurity Champion with Armando and has been a stand out performer throughout 2016 thus far. Velvets Revolver (WR This Cats Smart x Velvets Best Shot) has also been an exceptional gelding for his owners James and Nadine Payne. Both duos took home a check for $33,664 to add to their already great year!

Nadine and Velvets Revolver showed in the second set of finals laying down a beautiful run. The cows that the team picked were perfect to show off her gelding “Millhouse’s” talents. He stopped hard and got lower as the run went on. We could see the confidence in this duo as well. Nadine was overwhelmed with the excitement and support from her friends and cutting family. It is fun to see everyone come together to celebrate the success of such great people in our industry. She wanted to especially thank her help and John Johnson, who was also in the Non Pro finals on his gelding Rippin Ichi.

The team at Payne Cutting Horses is one of the best we have seen and is one to be admired. They are very hardworking and always happy for other’s success, so it is always great to see this group do well. Their slogan “No Payne No Gain” is absolutely perfect for these great people.