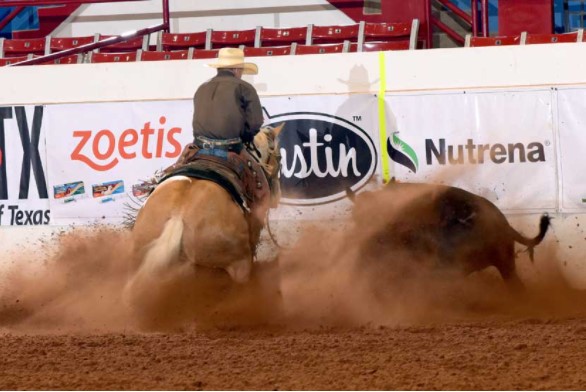 Ranching Heritage Challenge at the NILE

Wagonhound horses and cowboys dominate, but other ranches get a piece of the action at the Northern International Livestock Exposition.

Big Sky Country welcomed ranch horses with a beautiful day October 17, and ranch horses and their riders said howdy right back at the Northern International Livestock Exposition in Billings, Montana.

The first Zoetis AQHA Ranching Heritage Challenge in Montana was the last of the year with $15,000 on the line.

“Hesa Hickory Cat is a horse I showed last year in (reined cow horse) futurities,” Matt said of his 4-year-old winner. “He wasn’t real strong in the reining so we haven’t shown him much, but I won Wyoming’s futurity and Colorado’s cow horse futurity. I haven’t shown him but maybe half a dozen times this year. (Today), I went in there and he was outstanding in the reining, which was a huge shock – usually he boogers somewhere – but he stayed with me and was really good.”

In the working ranch class of AQHA Ranching Heritage Challenges, horses and riders work a short reining pattern before boxing a cow on one end and then taking down the fence for two turns. The riders have six minutes to complete all that and follow it up by roping the cow.

“Then they kicked the cow out and he’s usually good with a cow,” Matt said. “We boxed him around and got our two turns and went to the roping. The cow stayed true and honest and we got him caught, and ‘Hick’ went to the ground.”

Hesa Hickory Cat is a 2010 palomino gelding by WR This Cats Smart and out of Shiney Miss Hickory by Shining Spark. He was bred and is owned by the Wagonhound, an AQHA Ranching Heritage Breeder.

Matt didn’t have time to celebrate before he turned around and rode in as the first exhibitor in the 5/6-year-old class. His first ride was the winner on This Cats King, another palomino gelding by WR This Cats Smart and out of a Shining Spark mare.

“I showed him yesterday in open hackamore (at the NILE), and he was good,” Matt said. “We won that, and then we came here today and I jumped on him and went in there and showed him. He’s easy to show. He was decent in the reined work. We were a little long down the fence. We went around the corner, but he went right there and stayed hooked for a big turn for the second turn. We rolled into the roping and he rated off and was good.”

This Cats King and Matt also won the 5/6-year-old class during the Zoetis AQHA Ranching Heritage Challenge at the Snaffle Bit Futurity in Reno, Nevada. Wagonhound’s Matt Kelly won the limited open 4-year-old class on “Louis” in 2013 at the Fort Worth Stock Show. But when the horse’s show career is over, he won’t be heading back to the ranch to work cattle. The ranch has a different career in mind for him.

“Our end goal for him is to be the boss’ wife’s personal horse, so we’ll keep hauling him and keep him fit and showing so he’s ready for her when she’s at the ranch,” Matt said.

Matt was also the exhibitor in the 5/6-year-old class on the horse he placed second with, The Smiling Colonel, a 2009 black gelding by Just Plain Colonel and out of HR Smiling Light by Grays Starlight. He was bred and is owned by Wagonhound. The cowboys call him “Snowflake.”

“I’ve got two yellow horses I’ve been hauling all year – two yellows and a black – two colors that are unusual, and I’ve got them,” Matt said.
Wagonhound cowboy Chance Waite won the cowboy class on This Kissin Cat, a 2006 sorrel gelding by WR This Cats Smart and out of Quanahs Kiss by Quanah O Lena. The working ranch horse was bred and is owned by Wagonhound.

“We did the reining pattern they had set for us and going into the cow work, he was good, and the fence work was good,” Chance said. “He did really well considering this is the first time I’ve ever shown him.”

The Ranching Heritage Challenge at the NILE was the first for Chance and for his horse.