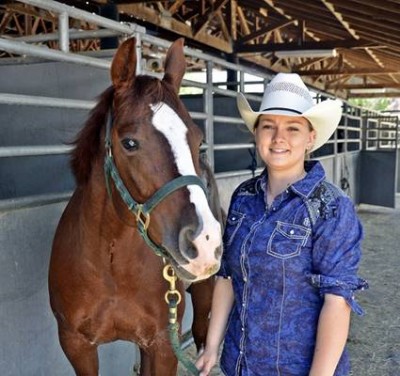 The performance meant a triple payday for Kania, who qualified for the finals in all three Non-Pro divisions. Besides the $1,650 Novice Championship check, she claimed $3,535 for the Intermediate Reserve Championship and another $3,535 for her fourth-place tie in the Non-Pro.

Elizabeth Kania and Tuckin Smart
“The fence work was fun,” the 21-year-old horsewoman said. “I felt like I finally showed my horse.”

Kania, who recently graduated from Pacific University with a biology degree, rides with Yamhill, Ore., professional Jim Spence. She also has received help from NRCHA Hall of Fame horseman Don Murphy. Spence has hosted several clinics with Murphy at his facility in Oregon.

“His clinics are really helpful. I enjoy it when he comes up. It’s hard to say just one thing he helped me improve; I think it’s overall. During the last clinic we had in May, we always run through the dry work first, and I remember him telling me, ‘You’re getting ready for the Derby, so you have to ride more aggressively.’ That’s what I was thinking about when I was showing here – be aggressive, which is not in my nature,” she said, smiling.