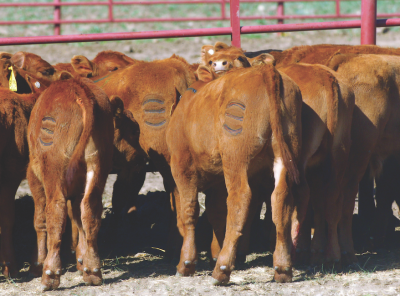 Maintaining the highest of standards and setting the pace.
Amercian Cowboy Magazine | By Bob Welch

About 20 miles south of Douglas, Wyo., along the Laramie Range, runs a creek that was notoriously tough to cross by settlers on the Oregon Trail. Often, the brace that connected a wagon’s tongue to its running gear—sometimes called the hound—would bust. Before long, the creek was named Wagon Hound.

More than 100 years later, Catherine and Art Nicholas purchased 200,000 acres along the creek and surrounding mountains and dubbed it Wagonhound Land and Livestock.

“We’re primarily a cattle operation,” General Manager Dustin Ewing says. “We’re going to calve around 4,000 commercial Red Angus cows next year. We have our horse operation, which is primarily focused on super nice ranch horses that can play in the cutting horse and reined cow horse arenas. Our farming operation, about 38 center pivots, ships alfalfa to dairy operations, local ranches, and horse operations. The hunting and outfitting division has some of the best elk hunting in the state of Wyoming—in area seven—which is a coveted draw.”

The quarter circle, bar, quarter circle brand—carried by all the cows and some 175 horses—is a loose interpretation of the hound of a wagon.

“The brand dates back to the Wyoming Territorial days,” Ewing says.

While the ranch has gone to great pains to restore and maintain its historical elements, it works just as hard to lead the ranching industry in its various interests. The horse program, in particular, boasts leading sire WR This Cats Smart, and many of the ranch’s young horses are champions in the Reined Cow Horse, American Quarter Horse, and Ranch Horse associations. The cow division was named the 2015 Commercial Producer of the Year by the Red Angus Association, and the outfitting division has raked in honors from the Wyoming Outfitters & Guides Association.

“We’re steadfast to maintain the highest of standards,” Ewing says. “It’s all about quality over quantity—all the way down to the range. I could run more cattle, but we’re concerned about being stewards of the whole system.”