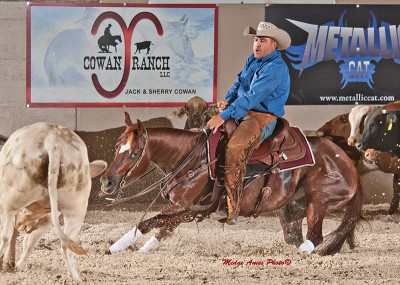 “Cyndi Cat has a really good, low style, so I try to play on that fact and cut some cows that she can keep in the middle and show off her good points,” said Wood, who also placed fourth with 222 points on Smart Stingrey, owned by Michelle LeMaster.

Eight-year-old Cyndi Cat, by WR This Cats Smart, qualified for the finals with 220.5 points in the go-round. Nine-year-old Smart Stringrey was the go-round winner with 223.5 points.

“We bought her for Dr. Dorros to show, but I show her to keep her right for him, whenever he wants to show,” said Wood, who won the PCCHA Winter Roundup Pro-Am on Cyndi Cat, career earner of over $125,000.